A woman’s life is like the seasons,
is nature itself.
So love every age for what it gives you,
and what it takes away.

CROWN is an international circle of women keen on sharing our stories along the different stages of the feminine life cycle. Through our individual strengths, gifts, cracks and blemishes, we are beautiful together. Through our singular experiences and viewpoints, we are infinitely joined. Our gatherings, both live and virtual, are spirited. The rich treasure that is the collected wisdom of our elders is unlocked by our questions and our genuine inquiry frees the budding wisdom of the new feminine from the old stories that are dying.

A CROWN Sister is unapologetically herself. She brings her whole self to the table ~ beauty marks, warts and all ~ to partake and to contribute, listen and invite. It is not a Crown’s way to nix, axe, scratch, redline, call off or in any way negate herself or another inside the circle or out in the wider world.

CROWN began as a gift from me to myself. I gifted myself time with my favorite elderwomen, then brought in my younger tribe and finally brought us all together in conversation. CROWN is one of the ways I’m building a “beloved community” (to quote Vincent Harding). I call CROWN my Communilumina, my community lit up.

The Fountain of Age 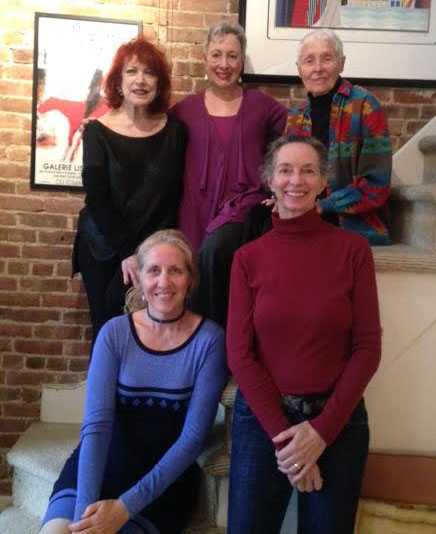 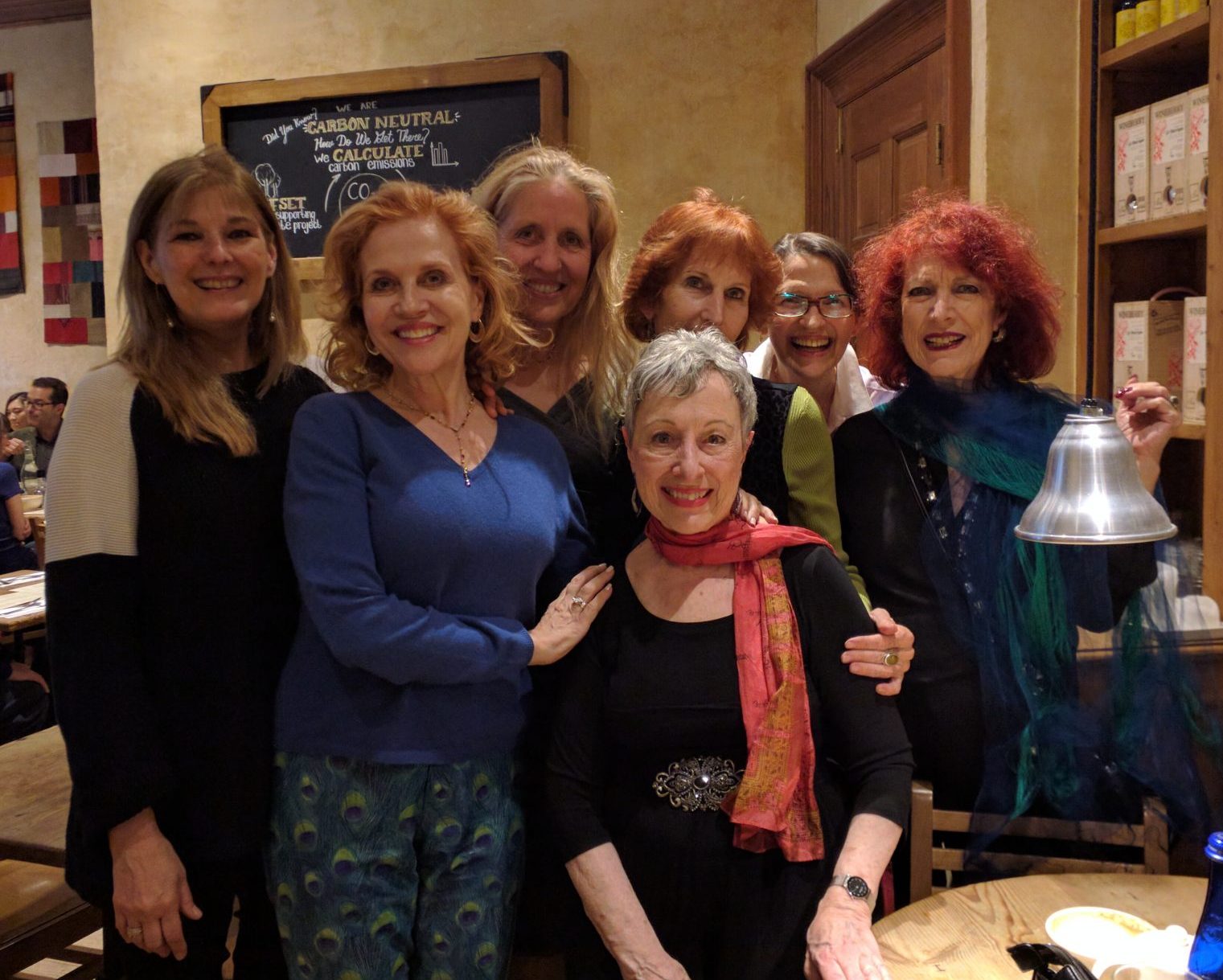 It was 2015, I was 52, at the far side of menopause and feeling vibrant and healthy. Until a relative announced: “You’re officially a crone!” Yikes! Alone the word…so hefty. Rhymes with moan, groan, bemoan. Such a little word packing so much weight. I had to respect it even as Grimm fairytale characters and Disney witches with long crooked noses flashed through my mind. I surely wasn’t a crone like that!

Positive, resilient and supportive women have been a part of my life’s journey. My grandmothers both survived two world wars with their hearts intact. My mother and her sister, the yin and yang of femininity, have been big influences upon me as has my mother-in-law who came into my life at 19. I’m lucky to have these latter three still closely with me, alongside elder colleagues and friends.

I looked at the word again and saw it: if I just swapped out the small “c” of crone with a large “K”, I’d have the German word for crown. Die Krone. That’s it! These are the crowning years, the glory years, the Goddess years, the queen years! I immediately organized a party to celebrate my “cronage”, my being in the youth of my old age and every bit the baby crone.

CROWN was inaugurated on May 1, 2016 in NYC. I sent news of the luncheon to crone sisters across the globe inviting them to lunch with a crone of their own in solidarity, or just indulge in a little Goddess-y self-care. I proposed that we continue to connect in-person and virtually on the cross-quarter days of May 1, August 1, November 1 and February 1. We still do that. 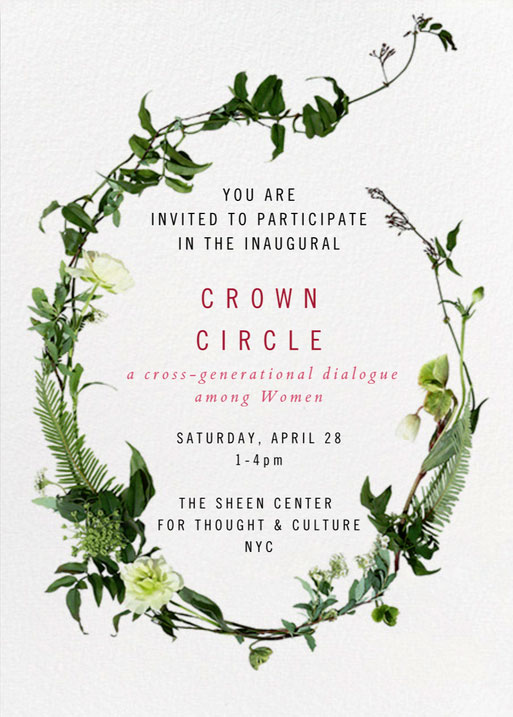 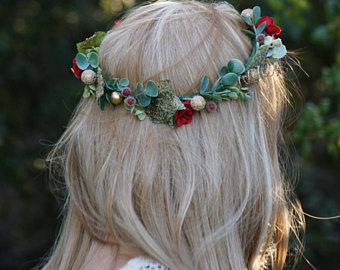 “Goddess” by James A. Vogel

(commissioned for Karen’s album, The Moons of Venus using photos of Karen, her mother, grandmother and Marlene Dietrich)

Women, as we connect the parts of our disembodied stories, our power to heal ourselves and our world becomes unlimited.

As the 2nd anniversary of CROWN neared, a grand new idea came to me. On one side of my life, I have my wise and experienced elders and on the other side my young and eager students coming for Lifecraft guidance around questions of family, partnership, work and purpose. Wouldn’t it be fantastic to bring the two together? To create a space for women at the polar ends of the adult feminine life cycle to sit down and dialogue?

The first CROWN Circle took place at the Sheen Center for Thought and Culture in Manhattan on April 28, 2018 with 14 women (7 crones and 7 maidens) from 5 countries: USA, Australia, Germany, Iran and Japan. Straight, gay and trans women. We began by unpacking the words “crone” and “elderwoman” from the perspective of our various cultures, ages and upbringing. We reflected on the #MeToo movement and touched on our inner masculine. It was a rich time and passed all too swiftly! By the end, we were all abuzz and someone asked, “Why can’t we have these Events more often?” And so we are.

I see endless ways in which future CROWN circles can grow and nudge us into reframing the stories we’ve been told and have been telling ourselves and each other. I want to guide our deep inquiry into the divine Feminine, the divine Masculine inside our Feminine and the divine internal Marriage, so we can approach the feminine and masculine outside of us with still greater love and richer understanding. This is an opportunity to shape what we want to take forward and what we want to pass on of ourselves in the name of our infinite and common humanity.

At this time, participation in CROWN events is by invitation only. If you’ve read this far and these words speak to you, feel free to contact me directly for information on how you can attend one of our events, host your own Crown Circle, and more. When you write, please put “Crown” in the subject line.