These themes are available as LECTURES and TALKS: 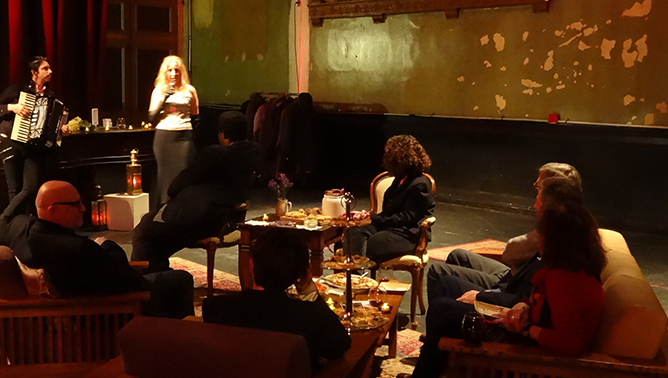 The Great Big Art of the Small 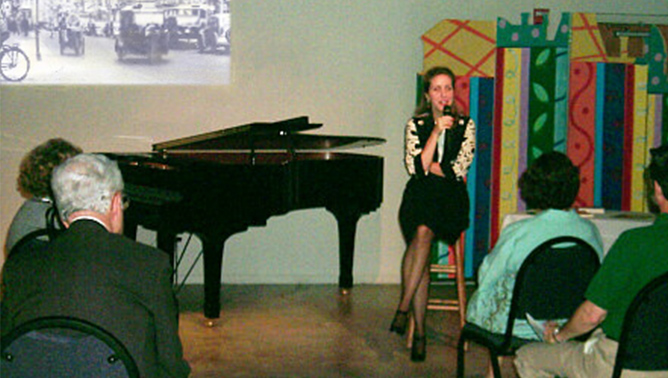 A History of Cabaret 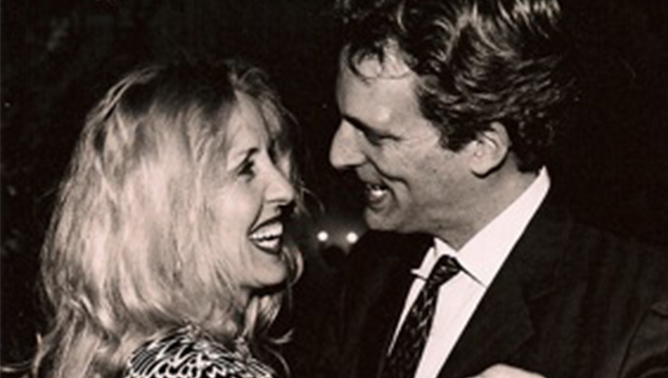 A Journey of Y-E-S

I believe it’s the hallmark of a true artiste not only to perform with all the heart and passion and love for music but to be willing and able to share this with others too. As you have.

The Great Big Art of the Small

Karen Kohler has been performing in rooms worldwide for over 20 years. As soloist, collaborator and ensemble leader, she crossbreeds a range of musical and theatrical influences – everything from jazz, blues, classical, folk-rock, cabaret and chanson.

Since 1995, Karen has also been an acknowledged exponent and historian of 20th century European roots cabaret and Kleinkunst. Yet her identification as a cabaret singer outside of known cabaret hubs like New York, London, Paris and Berlin has often drawn blanks or comments like “You do burlesque!”, “You’re a lounge act!”, “You’re a show girl!”, “You’re a shantuce!”

In 2019, at the end of a break she took from the active performing life, Karen returned with a new music label and on-line channel for the intimate arts, Ars Intima, two new solo projects,  and a new genre for the intimate performance art she makes that she calls ROOM.

In this discussion, Karen opens up about the nature of her songs, how they reveal the soul of a story, a person, a character and Karen herself. She explains how she landed on the name quite naturally. Rooms are where her eclectic range of songs have succeeded most as has the level of intimate connection she endeavors to cultivate with her audience and on-stage collaborators. “Delivering a show-stopping interpretation of an American or European standard in a large concert hall is a thrilling experience, “she notes. On the whole though, spaces with 500- to 5000-person capacities easily overpower the nuance, urgency, subtle humor and details of her silhouette and gesture that make her interpretations memorable. “Size matters,” says Karen. “Bigger is not better when it comes to this type of performance art where music, movement, theater and poetry meet.” Words and melodies come from all over the world. They are timeless, era-less, gender-less, genre-less.  The room’s the thing. Camera, chambre, cuarto, Kammer, kamer, sala, salon, Zimmer. ROOM. Read more about it on her Singing page.

Your passion for this music and all the history that surrounds it is stunningly palpable. Thank you bringing these many personalities to life through your stories and all the archival material you’ve collected. As a veteran who fought in Germany where I discovered my Lili Marlene, I can tell you that you are an ambassador for your mother country and your adopted country…a bridge between!

Karen was very generous with our theater students and provided them with many valuable tools with regard to performance, the history of cabaret and the life of a professional performer in New York.

You’ve really left an amazing impression at Long Island University. People are still talking about it. Many agree with me when I say that it was the best Convocation we’ve had since all of us have been here.

A History of Cabaret

Cabaret is an aesthetic extension of late 19th and 20th century social and political turmoil.

Part 1 of this course opens with a survey of the origins of the cabaret artform during the Belle Epoche of 1880’s Paris, and journeys on through Berlin of the 1920’s, New York in the 1950’s, and the pockets of interest in the artform throughout the world today.

Part 2 presents the era that has been Karen’s career focus as singer, director and producer: the years of the Weimar Republic when cabaret reached its 20th century zenith. She combines story-telling with photography, and various video/audio clips to bring this genre, era and its diverse cast of characters to life. Among the artists, composers and interpreters are: Toulouse L’Autrec, Yvette Guilbert, Kurt Weill, Arnold Schoenberg, Edith Piaf, Friedrich Hollaender, Mischa Spoliansky, Marlene Dietrich, Kurt Gerron, the Comedian Harmonists, Jacques Brel, Leonard Cohen, and many more.

Part 3 surveys the landscape that links mid-20th century Europe with our present moment when viewed against the framework of art, politics, socio-economics, race and gender. How is our time different, how is it similar? Which lessons from the past are being ignored, which are being heeded? What is blooming, what is dying?

There is no remedy for love but to love more.

A Journey of Y-E-S

With more than half of marriages ending in divorce, and recent deliberations on what and who is qualified to recognize marriage and be married, the private covenants that precede any legal union have gone missing. What might it mean to be “married,” regardless of what the state or one’s religion says?

Karen and Mac Kohler fell in love in Italy on a college singing tour, 35 years ago. The two share stories from their journey together through friendship, romance, separation, loss, reunion, family, career, and the radical openness with which they navigate the pathways of matrimony today with their families, both born and chosen.

(Length: 1 to 2hrs with option of Q&A afterwards.)

We put a cap on love when it comes to marriage. A hard limit. Now imagine loving with the heart of a parent. Think of it: your first child comes along and you love them with your whole heart. Then along comes your second child and you don’t say, “Gee, I’ve only got this much love, so let me take some love away from baby A and give it to baby B because that’s all the love I have to give.” That’s not what happens at all, is it? What happens is that you grow your heart, you grow it into something much much bigger. It grows with every birth that comes along. So why would you have a different kind of heart for your union than you have for your children?